By James Swan at Beggars All Reformation And Apologetics 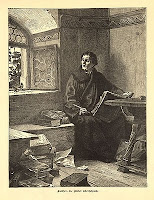 Have you ever been in a discussion in which it was asserted that Martin Luther added words to the Bible?

Here Are Some "choice" comments from the depths of cyber-space:

"Martin Luther ADDED words to the Bible that were not there. When he was confronted with this sin of adding to the Bible he replied: "Bacause Dr. Martin Luther will have it so!" This man was one ego-maniac with delusions of popehood." [Source]

"Romans 3:28 states, "Therefore we conclude that a man is justified by faith apart from the deeds of the law" (NKJV). Martin Luther, in his German translation of the Bible, specifically added the word "allein" (English 'alone') to Romans 3:28-a word that is not in the original Greek. Martin Luther reportedly said, "You tell me what a great fuss the Papists are making because the word alone in not in the text of Paul…say right out to him: 'Dr. Martin Luther will have it so,'…I will have it so, and I order it to be so, and my will is reason enough. I know very well that the word 'alone' is not in the Latin or the Greek text" (Stoddard J. Rebuilding a Lost Faith. 1922, pp. 101-102; see also Luther M. Amic. Discussion, 1, 127). This passage strongly suggests that Martin Luther viewed his opinions, and not the actual Bible as the primary authority--a concept which this author will name prima Luther." [Source]

"By September 1522, Luther had translated the New Testament into his version of the German Bible. It is to be noted that Luther taught a false doctrine that man was saved by faith alone, and upon his own recognizance and without any authority, he added the word "alone" to Romans 3:28, ... thereby ignoring all of the verses which admonish anyone not to add to or take away from, the Holy Word of GOD. He displayed his inflated ego and total arrogance, when he wrote the following regarding his addition:"If your Papist annoys you with the word (alone), tell him straightway, Dr. Martin Luther will have it so: Papist and ass are one and the same thing. Whoever will not have my translation, let him give it the go-by: the devil's thanks to him who censures it without my will and knowledge. Luther will have it so, and he is a doctor above all the doctors in Popedom."Amic. Discussion, 1, 127. Demonizing again! My My, tsk tsk, such language Dr Luther, and didn't he elevate himself above everyone on earth?This is the example set by the first Protestant, for his version of the command of Jesus Christ of, "Thou shalt love thy neighbor as thyself" (Matthew 22:36-40)." [Source]

"...Luther insists on his own (in effect) absolute infallibility. In defending his addition of the word "alone" to Romans 3:28 ("faith alone"), Luther railed: Thus I will have it, thus I order it, my will is reason enough . . . Dr. Luther will have it so, and . . . he is a Doctor above all Doctors in the whole of Popery. (O'Connor, 25; Letter to Wenceslaus Link in 1530)One wonders whether Luther uttered these absurd sentiments with a smile on his face, or with tongue in cheek. In any event, such boastful, essentially silly and foolish rhetoric is not uncommon in Luther's voluminous writings." [Source]

The arguments above are fairly simple: Luther simply inserted the word “alone” into Romans 3:28. Luther is painted as outrageous: he shows a total disregard for the sacred text, simply making it say what he wanted it to.

The main text of Luther used for these type of comments are his Open Letter on Translating (1530). Luther says in the introduction:

“…there has been much discussion about the translating of the Old and New Testaments. It has been charged by the enemies of truth that the text has been modified and even falsified in many places, which has startled and shocked many simple Christians, even among the educated who do not know the Hebrew and Greek languages. It is devoutly to be hoped that with this publication the slander of the godless will be stopped and the scruples of the devout removed, at least in part. Perhaps it may even give rise to more writing on such questions and matters such as these. Therefore I ask all lovers of the truth to take this work to heart seriously, and faithfully to pray to God for a right understanding of the divine Scriptures, to the improvement and increase of our common Christendom.”

The first section of the treatise is actually fairly angry, sarcastic, and humorous. Luther shows himself fed up with his Papal critics. His anger was fueled against them for an ironic reason- they rallied against his translation, while at the same time utilizing it for their own new translations. A strong Papal critic of Luther (Emser) did just that:

“We have seen that scribbler from Dresden play the master to my New Testament. I will not mention his name again in my books, as he has his Judge now, and is already well-known. He admits that my German is sweet and good. He saw that he could not improve upon it. Yet, eager to dishonor it, he took my New Testament nearly word for word as it was written, and removed my prefaces and notes, replaced them with his own, and thus published my New Testament under his name!”

2. Put this context into the quotes being misued.

With this context in mind, point out that Luther was blasting away at his Papal critics:

“I will go even further with my boasting: I can expound the psalms and the prophets, and they cannot. I can translate, and they cannot. I can read the Holy Scriptures, and they cannot. I can pray, they cannot. Coming down to their level, “I can use their rhetoric and philosophy better than all of them put together. Plus I know that not one of them understands his Aristotle. If any one of them can correctly understand one preface or chapter of Aristotle, I will eat my hat! No, I am not overdoing it, for I have been schooled in and have practiced their science from my youth. I recognize how deep and broad it is. They, too, are well aware that I can do everything they can do. Yet they treat me as a stranger in their discipline, these incurable fellows, as if I had just arrived this morning and had never seen or heard what they teach and know. How they do brilliantly parade around with their science, teaching me what I outgrew twenty years ago! To all their noise and shouting I sing, with the harlot, "I have known for seven years that horseshoe nails are iron.”

“Let this be the answer to your first question. Please do not give these donkeys any other answer to their useless braying about that word sola than simply this: "Luther will have it so, and he says that he is a doctor above all the doctors of the pope." Let it rest there. I will from now on hold them in contempt, and have already held them in contempt, as long as they are the kind of people (or rather donkeys) that they are.”

One can almost feel Luther’s anger towards his Papal critics. They discredited him as a doctor of theology, a degree he earned in a rather quick period of time, and his academic abilities were above most. Indeed, he had done the work necessary to be taken seriously. His critics criticized his German translation while at the same time stealing it for their own translation- this infuriated him, and rightly so.

This is the sad part about those who use Luther's Open Letter On Translating against him. He actually goes on to give a detailed explanation of why he uses the word "alone" in Romans 3:28. In the same document, in a calmer tone, Luther gives his reasoning for those with ears to hear:

“I know very well that in Romans 3 the word solum is not in the Greek or Latin text — the papists did not have to teach me that. It is fact that the letters s-o-l-a are not there. And these blockheads stare at them like cows at a new gate, while at the same time they do not recognize that it conveys the sense of the text -- if the translation is to be clear and vigorous [klar und gewaltiglich], it belongs there. I wanted to speak German, not Latin or Greek, since it was German I had set about to speak in the translation.”

Luther continues to give multiple examples of the implied sense of meaning in translating words into German. He then offers an interpretive context of Romans:

“So much for translating and the nature of language. However, I was not depending upon or following the nature of the languages alone when I inserted the word solum in Romans 3. The text itself, and Saint Paul's meaning, urgently require and demand it. For in that passage he is dealing with the main point of Christian doctrine, namely, that we are justified by faith in Christ without any works of the Law. Paul excludes all works so completely as to say that the works of the Law, though it is God's law and word, do not aid us in justification. Using Abraham as an example, he argues that
Abraham was so justified without works that even the highest work, which had been commanded by God, over and above all others, namely circumcision, did not aid him in justification. Rather, Abraham was justified without circumcision and without any works, but by faith, as he says in Chapter 4: "If Abraham were justified by works, he may boast, but not before God." So, when all works are so completely rejected — which must mean faith alone justifies — whoever would speak plainly and clearly about this rejection of works will have to say "Faith alone justifies and not works." The matter itself and the nature of language requires it.”

4. Previous translations of the word “alone” in Romans 3:28

Luther offers another line of reasoning in his “Open Letter on Translating” that many of the current Cyber-Roman Catholics ignore (and most Protestants are not aware of):
“Furthermore, I am not the only one, nor the first, to say that faith alone makes one righteous. There was Ambrose, Augustine and many others who said it before me.”

Now here comes the fun part in this discussion.

The Roman Catholic writer Joseph A. Fitzmyer points out that Luther was not the only one to translate Romans 3:28 with the word “alone.”

To these eight Lyonnet added two others (Quaestiones, 114-18):

Thomas Aquinas, Expositio in Ep. I ad Timotheum cap. 1, lect. 3 (Parma ed., 13.588): “Non est ergo in eis [moralibus et caeremonialibus legis] spes iustificationis, sed in sola fide, Rom. 3:28: Arbitramur justificari hominem per fidem, sine operibus legis” (Therefore the hope of justification is not found in them [the moral and ceremonial requirements of the law], but in faith alone, Rom 3:28: We consider a human being to be justified by faith, without the works of the law). Cf. In ep. ad Romanos 4.1 (Parma ed., 13.42a): “reputabitur fides eius, scilicet sola sine operibus exterioribus, ad iustitiam”; In ep. ad Galatas 2.4 (Parma ed., 13.397b): “solum ex fide Christi” [Opera 20.437, b41]).

Even some Catholic versions of the New Testament also translated Romans 3:28 as did Luther. The Nuremberg Bible (1483), “allein durch den glauben” and the Italian Bibles of Geneva (1476) and of Venice (1538) say “per sola fede.”

I've also had a written debate with a Roman Catholic on Luther's use of the word "alone." That can be found here.
Posted by Jesse at 3:47 PM