Punching Holes In A King James Only Conspiracy Narrative

One quibble that we regularly hear from King James Version only advocates is that the Roman Catholic Church has produced corrupt Bible translations in an effort to discredit that particular archaic translation and gradually convert unsuspecting people. 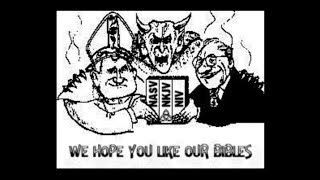 A few examples of Scripture passages that have supposedly been removed from our modern Bible versions would include Mark 16:9-20 and John 7:53-8:11. This theory leaves us with a nagging question, however. If the Roman Catholic Church was involved in some conspiracy to undermine the authority of the King James Bible, then why does that hierarchy accept those passages as inspired Scripture despite them being included in textual brackets?

Following is a footnote from the New American Bible Revised Edition on the text of Mark 16:9-20:

"This passage, termed the Longer Ending to the Marcan gospel by comparison with a much briefer conclusion found in some less important manuscripts, has traditionally been accepted as a canonical part of the gospel and was defined as such by the Council of Trent."

Following is a footnote from the New American Bible Revised Edition on the text of John 7:53-8:11:

"The Catholic Church accepts this passage as canonical scripture."

The New American Bible has been formally sanctioned by the Church of Rome for distribution and edification in faith. Also, it contains footnotes which plainly indicate to us that Mark 16:9-20 and John 7:53-8:11 are accepted as inspired Scripture in Roman Catholicism. Yet, King James only proponents refer to these two passages as examples to demonstrate how scholars for the pope want to destroy the credibility of the King James Version.

Hmm, it would definitely seem counterproductive for scholars who have malicious motives to outrightly affirm the texts that they are attacking to be divine revelation. That stretches credibility. A much more reasonable and truthful explanation for bracketed texts in modern translations is the reporting of manuscript findings.

While none of this material is meant to excuse Roman Catholicism for theological error, the fact remains that we must be responsible and mature when expressing disagreement. There are bonafide conspiracies, as well as elaborate myths. Both merit exposure. The claim that the Roman Catholic Church has produced counterfeit translations for the express purpose of undermining the authority of the King James Version of the Bible does not hold water.
Posted by Jesse at 12:23 AM